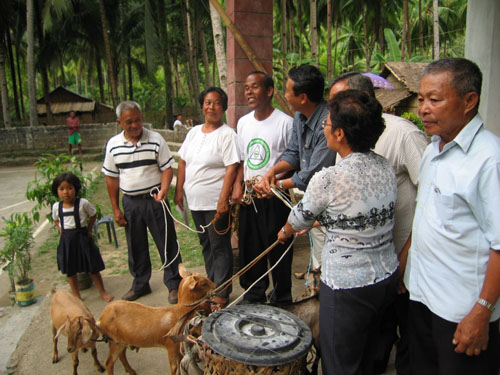 They sat in small semi-circles with their families along the interior edges and viewing steps of the old concrete basketball court. Their provisions of native dishes, steamed rice and root crops were all ready for the meal blessing. Although only one member per family was wearing the white t-shirt printed for the occasion, everybody enjoyed chatting, obviously excited for the most awaited event to finally happen.

There was a long table placed upstage which was arranged solely for the guests. The foods on it were no different from the fare of those sitting downstairs, except for the row of locally prepared desserts set at a separate table.

The municipal officials and employees came in throngs as they disembarked from their vehicles. They were led by no less than the newly elected town mayor of Malitbog, Hon. George Go, who took back the municipal reins from his wife who had just finished her last term. They were welcomed by Barangay Captain Jaime Miole of Barangay Mahayahay and other eager community leaders, including those of the self-help groups coming from the host barangay of Lambonao .

As they were ushered to a corner, they were met by Dr. Ed Sabio, country director of Heifer International Philippines (HPI), and his staff. The encounter turned out to be a reunion between Dr. Sabio’s wife and the lady municipal sanggunian secretary, who were classmates during their college years.

Striding back and forth across the court between these groups of individuals was PROCESS community facilitator Frank Patulilic. He looked tense and tired but had to take resolute acts to make sure everything is in order, from the livestock to the people present.

That’s the scene prior to the Passing on the Gifts (POG) ceremony proper for the Sharing and Caring Others in Watershed (SCOW) Project last June 26 this year in the municipality of Malitbog, Southern Leyte. It did not start until we arrived. What a good timing for the sumptuous lunch!

The Executive Director of PROCESS, Ms. Emmie Roslinda, declared that the recipient-families should not be called beneficiaries but rather partners in the project.
During the Mass, celebrant priest Fr. Allen Arayan took the opportunity via his homily linking the local initiative to the broader issue of global warming. He cited the documentary of former US Vice President Al Gore entitled “An Inconvenient Truth,” which depicts statistics and real scenario effects of the phenomenon.

To demonstrate the passing on the gifts, five families were called up to receive an animal health certificate, the contract, the donor’s message card, and, of course, the animals.

When asked to come on stage to say a few words of thanks, no one in the crowd could believe as they spoke, except for themselves who struggled to suppress their stage fright and tried to keep their poise in check. For most of them, it was their first time to speak before a crowd as big as that.

In between speeches, song and dance presentations entertained the crowd which did not diminish in number despite intermittent rainshowers. A local string band composed of local musicians alternated with the electric sound system to keep the social gathering alive.

At any rate, the SCOW Project is currently implemented inside the Biliran watershed, particularly in barangays Mahayahay and Lambonao. Its twin goals for the target 40 families are for increased income and improved nutrition at the end of three years. To attain this situation, the original families will receive 15 chickens each (13 pullets and 2 cockerels). Twenty families will get five ready-to-breed does each and ten will have a horse each.

Planting materials will also be distributed for backyard vegetable gardening, agroforestry farms, and reforestation of denuded hillsides and riverbanks. Every year, these original families will pass on the offspring and crop seeds, including knowledge and skills learned during trainings and actual applications, to the next batch of families in need within and outside their respective barangays.

In the final analysis, the project participants themselves will turn from mere recipients to donors. And in the process, the sense of spirituality, love and care towards others will serve as the core values.