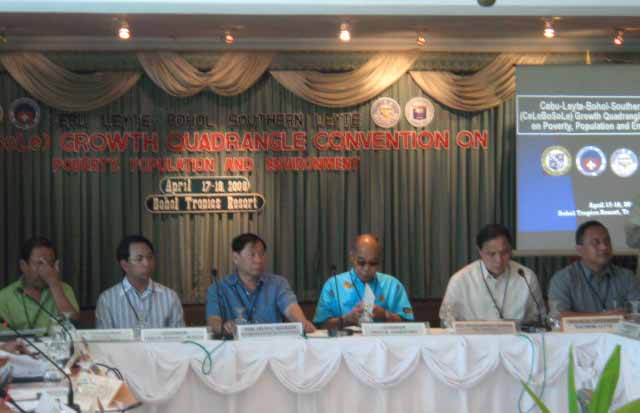 The interconnection between population and environment and its impact on food security and poverty are the main issues tackled by the four governors and mayors from the 16 municipalities and 3 cities of the provinces of Cebu, Leyte, Bohol and Southern Leyte (CeLeBoSoLe) during the CeLeBoSoLe Growth Quadrangle Convention on Poverty, Population and Environment on April 18, 2008 at the Bohol Tropics Resort.

The convention is sponsored by the Province of Bohol through the leadership of Governor Erico B. Aumentado in partnership with PATH Foundation Philippines and its local NGO partner, PROCESS-Bohol, Inc.

During the meeting, the CELEBOSOLE Memorandum of Agreement (MOA) was signed by the LGU executives and heads of the concerned government agencies. The MOA is patterned after a previous agreement which was signed in October 2002 focusing on coastal resource management of the Danajon Bank. It also aims to revitalize the CeLeBoSoLe Council and its Technical Working Groups (TWG).

The Council is an inter-regional, multi-province and multi-agency management body composed of the governors of the provinces of Cebu, Leyte, Bohol, and Southern Leyte. Other members include regional heads of the Department of Environment and Natural Resources (DENR), Bureau of Fisheries and Aquatic Resources (BFAR), Department of Interior and Local Government (DILG), National Economic and Development Authority (NEDA), Philippine National Police, Office of the President for Central and Eastern Visayas, and the Mayors of the 19 municipalities and cities whose boundaries overlap the Danajon ecosystem. In addition, the Danajon EcoFIRM Project for CELEBOSOLE will be formally adopted.

Nearly one million people live in the vicinity of the Danajon Bank that depend upon its fisheries for sustenance and livelihood. The bay contains the sole documented double barrier reef in the Philippines and South Asia, comprising over 1% of the total coral reef area in the Philippines. Increasing demand for food-fish coupled with illegal commercial fishing and weak enforcement of environmental codes have contributed to the rapid decline of the Bank’s fisheries over the years. The Danajon ranks among the most densely populated ecosystems in the Philippines with an estimated average density of about 450 persons/km2 compared to the national average density of 253. Local populations living in the Danajon are expanding at an average rate of 3.1% per annum compared to the Philippines‘ overall growth rate of 2.3%. Over 60% of people living in these communities live below the poverty line.