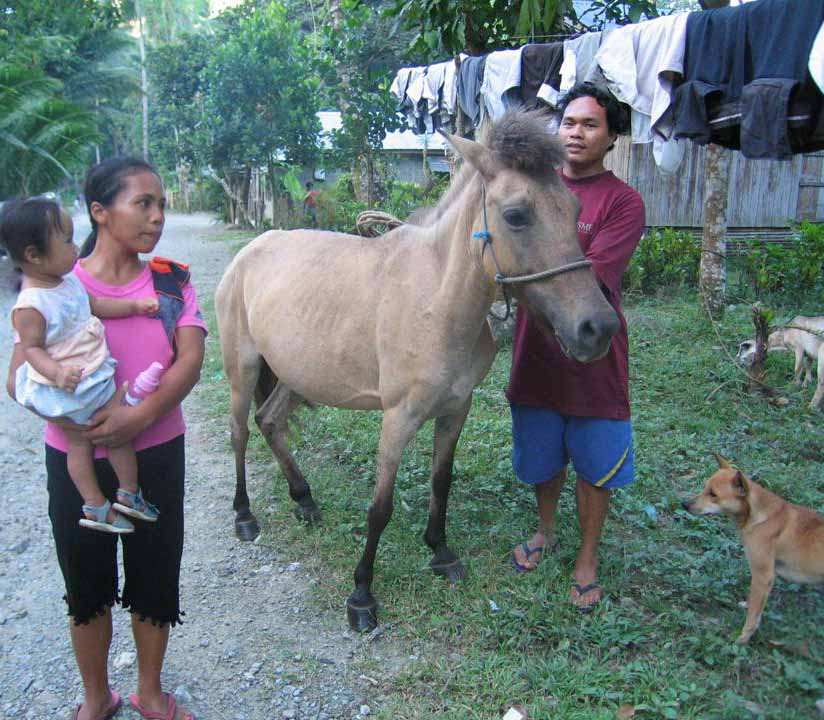 Sensyo and Joy Gaviola were once a common law couple residing in barangay Mahayahay in the municipality of Malitbog, Southern Leyte, which lies within the midstream portion of the Biliran Watershed. They are blessed with one child who is a baby girl.

Before, the couple was noted to be so shy in public. They had no community involvement except to barangay assembly meetings and during election time. They thrived on hired labor whose income is not enough to sustain their family needs. That’s why they put aside marital rite from their priority.

When the SCOW Project started in early 2007, the couple was one in the list of 20 indigent families of said barangay who were invited to participate. From thereon, they become regular participant in project trainings and organizational meetings. Upon their choice, they got 15 native chickens, 1 mare (a female horse), and a set of garden tools and vegetable seeds. Just for 1 month from the receipt of the horse, they earned P3,000 from karyada (hauling services) of their neighbors’ farm produce. Their earnings accumulated later to P7,000 which they spent during the delivery of their baby and wedding ceremony in May and June, respectively, last year.

Presently, the couple is very active in their self-help group. They are no longer much dependent on hired labor for survival. They are pre-occupied with farm chores and just discovered that re-cycled rice sacks are good mulching material for vegetable gardens in lieu of the commercial but expensive plastic sheets.

The SCOW Project is the first and only field project of PROCESS-Bohol implemented outside the province of Bohol with funding assistance from Heifer International – Philippines. SCOW stands for Sharing and Caring Others in Watershed, a watershed-based development initiative that considers not just increase in family income but also changes in human behavior and values as key indicators of success.